Skip to content
Running on Change Uncategorized October 27, 2014 3 Minutes
I always for get to pull my phone out at race time, I think its because I am freezing and doing anything other than keeping warm takes too much effort and thought, and it was freezing Saturday.  Thankfully Andrea, the person in almost all the photos, had a lot of fans so we were able to get a lot of pictures taken with out pulling our phones out mid race and angering(not sure if that’s a word?) the other runners.

I love these fire pits they bring the herd of runners together and the temperature change from within the herd to outside, by the bathrooms, was outstanding it felt like there was a ten degree difference from one spot to the next.  We ended up waiting at the start line for about an hour and a half, the buses left really early and the race started later in the day.  Start time was 8:45 a.m..

This isn’t a great picture, and I feel like I show my feet a lot on this blog, but right where my foot strikes there is a blister within a blister here.  The first blister developed when I went running down Big Cottonwood Canyon, then below that blister a much larger, much more painful blister developed it was early into the race as well. 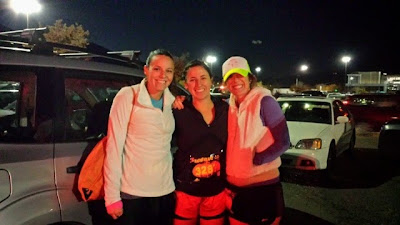 I love this picture, it’s not very often where I take a posed picture and I don’t have one eye closed and my mouth gaping open.  The people in the photo are (from left to right), Andrea, myself, and Annie.  This was Annie’s first road half, she has done full’s and half’s before but she loves the trails so the road was new to her, she killed it finishing at what I believe was 1 hour and 59 minutes.  Mine and Andrea’s time was 2 hours and 12 minutes, I was hoping for a little faster but I didn’t really train for this it was a spur of the moment sort of thing and the goal when I signed up was to just have fun and we had tons of fun running together, Andrea is a great running buddy.  This was also Andreas very first Half Marathon and she did so good!!

Andrea’s mom was so fun she made us smile even though we were drenched in sweat and gasping for air!

I learned my lesson after the first two aide stations, and that was To Walk Through Them!! It is much worse to choke on water and then get a side ache than it is to take your time and walk through and enjoy the little break.  I should have brought my hydration belt, I usually don’t like them when the aide station are set up but we ended this race at roughly 11 a.m. on Saturday and it was an unusually warm day and even though I knew better I wore a long sleeve jacket that was black for the entire race.  I was on fire.

Published by Running on Change

View all posts by Running on Change